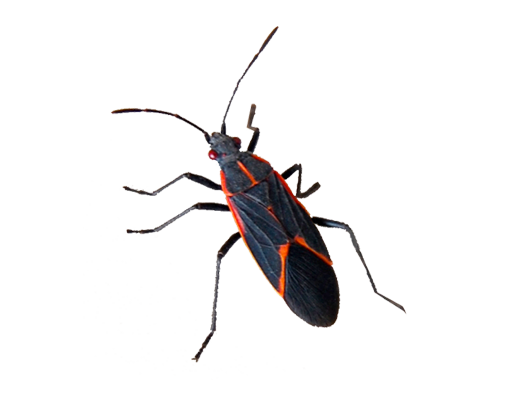 The boxelder bug, or Boisea trivittata, is a North American species of “true bug.” True bugs are different from insects in a few ways, but most notably because they all have long, thin, straw-like mouths used for eating. Boxelders have a striking appearance with black, flat, and narrow bodies with bright orange or red markings. They are relatively small bugs, averaging just a mere ½ inch long in adulthood. Boxelder bugs have six legs, two wings, and two antennae. While they are commonly mistaken for a stink bug due to their similar appearance, the boxelder bug is a very different bug. You may also hear boxelders referred to as boxelder beetle or maple bug.

Boxelder bugs get their name from their favorite snack – the boxelder tree! Boxelder bugs enjoy feeding on female, seed-bearing trees by sucking out sap from leaves, soft twigs, and early-growing seeds.

The Boxelder bug is a hemimetabolous insect, meaning it develops in three distinct life stages: egg, nymph, and adult.

In the spring, adult boxelder bugs will lay their eggs inside trees or even on their leaves. As prolific reproducers, adult boxelders can lay several hundred eggs at a time! These eggs are small, oval in shape, and generally are a rusty red-brown color. It is thought that the egg’s coloring acts as camouflage so they can blend in with their host tree and remain hidden from predators.

As the weather grows cold, adult Boxelder bugs will seek a warm, habitable space for overwintering. They can fly as far as two miles in search of the perfect place to hibernate for the winter. Only fully grown adults will survive the winter and emerge again come spring in search of food. This is also when Boxelder bugs will begin their extremely prolific reproduction cycle, creating hundreds of more Boxelders each.

WHAT IMPACT CAN BOXELDER BUGS HAVE ON MY HOME?

A Boxelder bug’s excrement is known to stain light colored surfaces including sidewalks, outdoor seating, and even house siding. These stains can be very difficult to remove. In addition, Boxelder bugs also emit a strong and offensive odor when stepped on or otherwise crushed. These secretions are also quite foul tasting. Pets who accidentally (or intentionally) eat a Boxelder bug may vomit due to the bug’s foul taste and resulting unsettled stomach. While Boxelder bugs are not considered to be toxic to animals, we recommend that you contact your vet immediately if you suspect your furry friend has eaten a Boxelder bug.

During the warmer months, Boxelder bugs aren’t an immediate cause for concern. Their sheer population and quantity may be overwhelming, but in general, they pose no direct harm. It is as the weather begins to cool and temperatures drop that Boxelder bugs begin to become a problem to homeowners. As fall transitions to winter, Boxelder bugs are on the hunt for a warm place to overwinter. Unfortunately, your home may be the ideal destination.

While Boxelder bugs generally hibernate when they overwinter, if they find a consistently temperate place to reside, they may stay out and about all winter long. As most homes are heated throughout the winter to remain a comfortably mild temperature, Boxelders who find their way in may remain active throughout the winter. It is when Boxelder bugs have taken up residence in your home that they generally become a problem pest for homeowners.

HOW TO PREVENT BOXELDER BUGS IN YOUR HOME

Thanks to their flat and arrow bodies, Boxelder bugs can enter your home through the smallest cracks and crevices. Some common entry points are poorly sealed windows and doors, gaps or spaces where utility lines connect to your home, and even underneath your home’s siding. While Boxelder bugs will opt for any home for refuge during the cold winter months, they tend to gravitate to homes on level ground that receive a lot of direct sunlight. While preventing Boxelder bugs from entering your home can be tricky, here are a few tips that will make it more difficult for Boxelder bugs to gain entry.

WHAT SHOULD I DO IF I HAVE A BOXELDER BUG INFESTATION?

Sometimes, Boxelders can invade with little to no warning. If you find yourself with an active Boxelder bug infestation, we suggest you contact a reputable pest professional like EcoShield immediately. While a few bugs here or there may be able to be managed by a homeowner, true infestations can be difficult and very stressful to overcome. When your home is overrun with unwelcome visitors, give EcoShield a call.

If you’re experiencing a Boxelder infestation or would like to safeguard your home from future invasion, give EcoShield a call today or fill out the form on this page. We offer free no-obligation quotes, excellent customer service, and guaranteed results.

The best method for boxelder control is prevention. They are considered to be an “overwintering pest," which means they enter your home to escape the cold during winter. Although they don’t reproduce when in this state, they can enter your home and become a nuisance in your home. To effectively prevent bugs that overwinter, make sure you seal up any cracks in your home, especially around windows, vents, and doors. Once they have infested a structure, professional pest control services are the only solution to complete boxelder bug control.