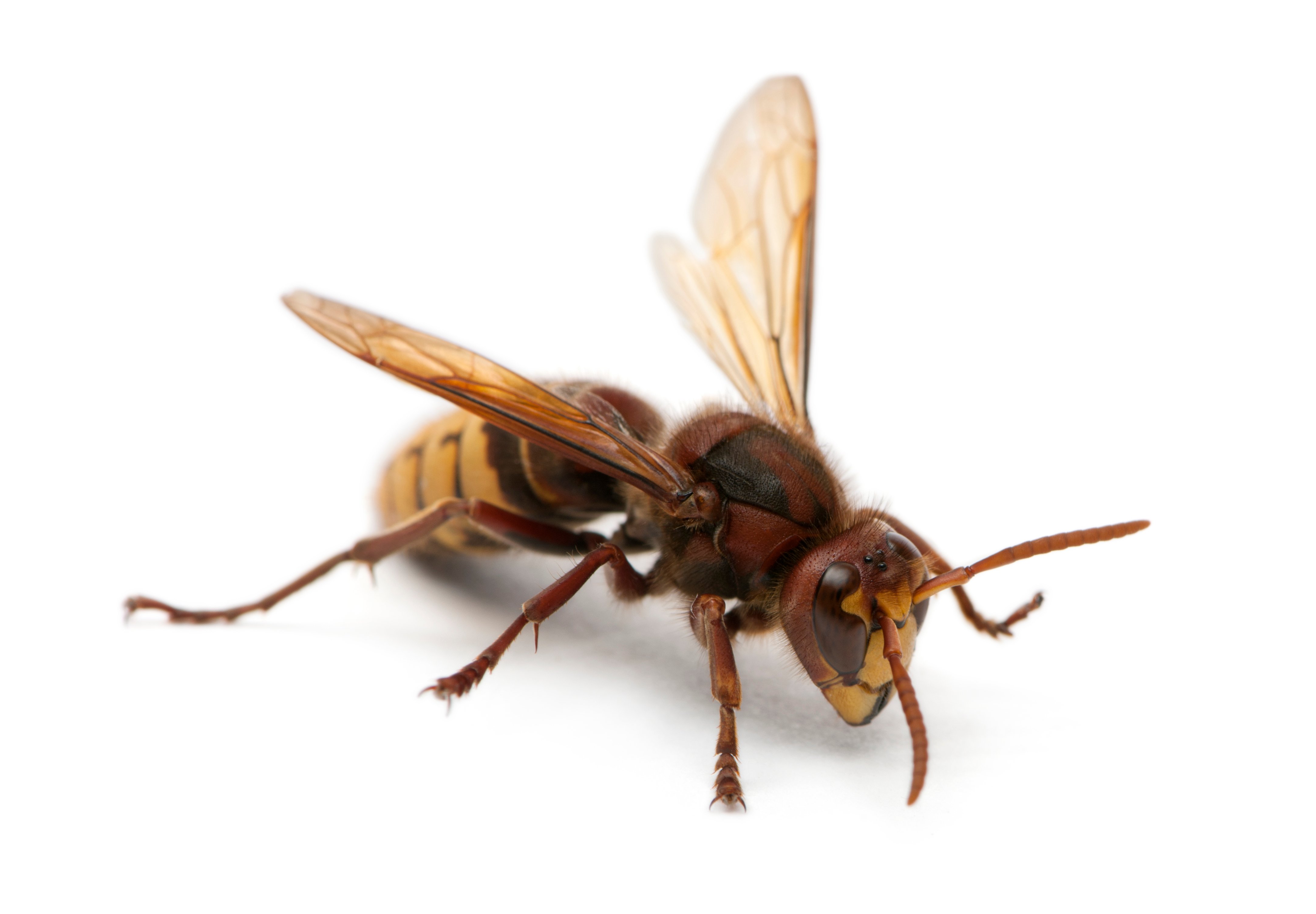 How Do I Identify European hornets?

European hornets are considerably large insects, measuring between 2 and 3.5 cm in adulthood. These insects have large but slim yellow and black striped abdomens with a red-brown head and large eyes. European hornets also have long, red-brown legs and corresponding antennae. Like most wasps, European hornets are generally slender, smooth, and relatively hairless when compared to bees. They also have pointed lower abdomens and an identifiable small, pinched “waist.”

European hornets are the largest eusocial wasps that are commonly found in the United States (though they are native to Europe.) As social wasps, their colonies can grow anywhere from 200 up to 500 wasps. Needless to say, large wasps appearing in the hundreds are an obvious concern for many homeowners, especially due to their nests frequently occurring near homes. European wasps like to build their nests anywhere there is a hollow cavity. Some of the more common spots include attics, chimneys, holes in trees, between walls, and sometimes even underground.

European hornet nests are rarely fully exposed or visible to the naked eye, however nests will sometimes extend past their hollowed cavities as they grow in size. Their nests are brown and paper-like in texture and are usually shaped somewhat like a football. You’ll likely not be able to see the comb-like structure within the nest as the hornets will build a thin layer of paper-like material on the outside. This layer is primarily intended to form as protection from any elements the nest may be subject to.

Most hornet stings will occur when humans either intentionally or unintentionally threaten them. This can happen when one accidentally stumbles into a European hornet’s nesting site, which can be common due to their out-of-the-way locations. When someone enters their territory and is perceived as a threat, that is when the European hornet’s hostility will show. They will aggressively defend their nests and become otherwise uncharacteristically hostile. The same can be said if you come between a European hornet and its food. (I guess we all get hangry!)

It’s important to note that European hornets, like all wasps, can sting multiple times. This is because they do not lose their stinger after stinging like some of their bee cousins. The European hornet sting is painful, though no more than other wasp’s stings. While there is a myth that hornet stings are enough to kill a human, this is simply not true. The only time in which a human would be at risk of serious injury from a European hornet sting would be in the event of an allergic reaction. If this should occur, it is recommended that you seek medical attention immediately.

In the hot summer months, it’s not uncommon to encounter wasps and bees of all kinds around your home. Some may just be passing through, but there’s a good chance a few are building nests nearby either on your property or, worse, inside your home! Due to the European hornet’s nesting habits, they are frequently found in and around homeowner’s houses. While it may not be possible to entirely prevent wasps and hornets building nests nearby, there are a few ways to deter them and make your spaces less appealing.

If you suspect there is a European hornet’s nest in or around your home, please do not attempt to treat it yourself. Although they are not typically aggressive, European hornets will fiercely protect their nests and attack anything they perceive to be a threat. By attempting to spray or knock down a hornet’s nest, you will be at risk of an entire colony coming to defend their home with stingers at the ready. Please remember that European hornets can and will sting multiple times, especially if provoked. Not only are DIY-attempts potentially ineffective, but they can also be very painful!

Your best bet for effective, safe, and permanent hornet removal is to contact a reputable pest control company like EcoShield at the first sign of an infestation. EcoShield’s experienced pest professionals are trained in safe nest removal practices and will return if the hornets do. Hornet removal is covered by EcoShield’s Home Protection Plan, but we also offer a one-time treatment option for wasp and hornet removal. For the safety of you and your family, we do not recommend self-treatment of any pests, let alone stinging insects. Call EcoShield for 100% guaranteed European hornet removal all summer long.