Yellowjackets are one of the most widely known but least understood stinging insects we work with. There seems to be a lot of confusion and misconceptions surrounding the yellowjacket, from what kind of insect they are to whether or not they bite! We're here to help answer some commonly asked questions and provide much-needed information. To learn more about yellowjackets and the danger they pose to humans, be sure to check out the blog post below! 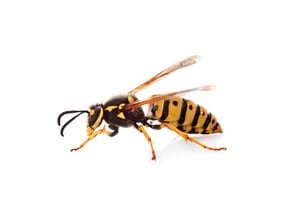 What are yellowjackets and how can I identify one?

Yellowjackets are just one of over 30,000 wasp varieties that exist in the world. Wasps are a broad group of insects in the Hymenoptera order and Apocrita suborder. Apocrita is one of two suborders of Hymenoptera and includes insects such as ants, bees, and wasps. Yellowjackets are a small but aggressive variety of wasp that live worldwide and make an appearance when warmer weather hits in spring and summer. Although many stinging insects can be seen buzzing around as temperatures creep up, yellowjackets are some of the more feared. Despite this, many cannot distinguish between a yellowjacket and another wasp variety due to the many striking similarities between wasp types.

Yellowjackets are noticeably smaller than other kinds of wasps, particularly the common paper wasp. For reference, adult paper wasps grow to be around 16-20mm long, while yellowjackets max out at 10-16mm in length. If you can get one to sit still for long enough, you’ll also notice yellowjackets have solid black antennae and short, yellow legs. In-flight, yellowjackets keep their legs tucked beneath them, while most other wasps will let their legs dangle. They also have striking, black-and-yellow banded abdomens, often with black dots within the yellow bands. While both a Western and an Eastern yellowjacket variety exist, their appearances remain fairly consistent and they look quite nearly identical. 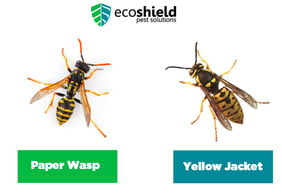 Where do yellowjackets live?

Another reason yellowjackets are often within close proximity of humans is due to their nesting habits. Most varieties of wasp opt for high and hidden nests, choosing places like tree branches, gutters, and roof eaves. Yellowjackets, on the other hand, build nests low to the ground (or even in the ground) where humans can accidentally stumble into. Some popular nesting spots for yellowjackets include basements, abandoned gopher holes, and even the lids of garbage cans. They’re also known to build hives in particularly tricky spots, such as between walls (yes–your home’s interior walls.)

Yellowjacket nests are rarely visible to the naked eye due to their tendency to be built in hidden locations. Their nests can grow quite large over the course of the summer, especially when they go untreated. It can be very easy to overlook or miss a yellowjacket’s nest, allowing for them to continue to grow exponentially while out of sight. Nests can easily grow to be as large as a basketball and the only indicator may be a small, one-inch hole in the ground and an influx of yellowjacket sightings. If you suspect there is a yellowjacket in or near your home, contact a pest control specialist immediately. Do not attempt to treat for yellowjackets yourself. Yellowjackets are notoriously aggressive and can inflict a great deal of pain on those who try to exterminate them.

Can yellowjackets sting or bite me?

Yellowjackets are not only stinging insects, but they’re also capable of stinging multiple times. This is because, unlike bees whose stingers usually detach after stinging, wasp stingers remain intact after stinging someone. All wasps have this unique capability, but that doesn’t mean they all necessarily use it. Many wasps will only sting if they perceive you as an immediate threat. In cases such as this, you may be stung once as a sort of “warning.” Continued provocation may be cause for multiple stings, however.

Yellowjackets differ from many other wasp species in this way. Yellowjackets are known for their aggressive nature and their angry disposition has often led to unprovoked stings. This means yellowjackets may very well sting you despite giving them a wide berth and attempting to steer clear of their nest sites. They may also chase you up to several yards if you run from them. Single yellowjackets are also known to sting multiple times and not necessarily due to continued human instigation, but rather just because they can.

While many know that yellowjackets, along with other wasps, can deliver a painful sting, few know that they can actually bite, as well. This is because very few wasp varieties use this ability. Their tiny jaws are not their best defense against a human, but some claim that yellowjackets will bite if provoked. There is some debate about whether yellowjackets use their scissor-like jaws to harm humans; according to our entomology experts, while it's certainly possible, but likely not very common as yellowjackets typically use their mandibles for feeding on prey. 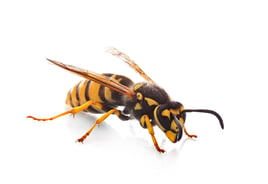 How can I keep yellowjackets away from me and my home?

Armed with this knowledge, it’s only natural to ask: “how can I keep those punks AWAY from me?” It’s a great question, but one with limited answers. Keeping wasps and yellowjackets away from your home can be a difficult endeavor, especially without the help of professional pest control. Yellowjackets are especially troublesome to avoid due to their inconspicuous nesting habits. However, there are a few universal tips that may help dissuade wasps from building their home near your home:

What should I do if I find a yellowjacket nest?

If you encounter a yellowjacket nest, or anything other stinging insect’s nest, please do not attempt to get rid of it yourself. Proper identification of the specific wasp you’re dealing with is key in removing the nest and preventing their return. Not only can treating it yourself be ineffective, but it very well may be dangerous, too. Please remember that while not all wasps are naturally aggressive, every wasp variety will attack when their nest is disturbed. They will chase after you in numbers and sting you multiple times each. This has the potential to be a dangerous and painful situation. Again, we do NOT recommend attempting to remove any stinging insect’s nest yourself. 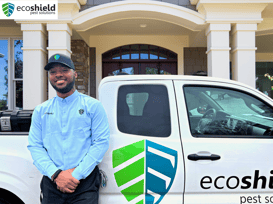