What are wasps vs. yellowjackets?

As temperatures rise throughout the U.S., so do concerns about stinging insects. Most of the more commonly encountered wasps tend to make an appearance in the spring and stick around all summer long. Warmer weather brings a variety of stinging species out from hibernation with the promise of abundant food and the opportunity to reproduce. Humans emerge from our own version of hibernation as we spend an increased amount of time outside after hunkering down all winter. Needless to say, mild weather almost always equates to humans and wasps crossing paths. But when they all look so similar, how can we know which ones to watch out for? 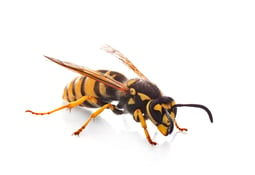 Are wasps and yellowjackets the same thing?

Homeowners frequently ask us: “Are wasps and yellowjackets the same thing?” The answer is… it depends.

Wasps are a broad group of insects in the Hymenoptera order and Apocrita suborder. Apocrita is one of two suborders of Hymenoptera and includes insects such as ants, bees, and wasps. Yellowjackets are actually a specific type of wasp, just as paper wasps, hornets, and mud daubers are all a type of wasp. With over 30,000 identified varieties of wasp, yellowjackets are just one of the many frequent stinging pests our customers may deal with. So, to answer the question at hand: all yellowjackets are wasps, but not all wasps are yellowjackets. (Think all squares are rectangles, but not all rectangles are squares.)

And while it’s a confusing question to answer, it is certainly an important question to ask. Despite yellowjackets being a variety of wasp, yellowjackets differ from many other classifications of wasp in several important ways. Knowing these differences as a homeowner may change your mind regarding how you deal with them.

How can I tell a wasp, yellowjacket, & hornet apart?

Yellowjackets are noticeably smaller than other kinds of wasps, particularly the common paper wasp. For reference, adult paper wasps grow to be around 16-20mm long, while yellowjackets max out at 10-16mm in length. If you can get one to sit still for long enough, you’ll also notice yellowjackets have solid black antennae and short, yellow legs. In flight, yellowjackets keep their legs tucked beneath them, while most other wasps will let their legs dangle. They also have striking, black-and-yellow banded abdomens, often with black dots within the yellow bands. While both a Western and an Eastern yellowjacket variety exist, their appearances remain fairly consistent, and they look quite nearly identical. 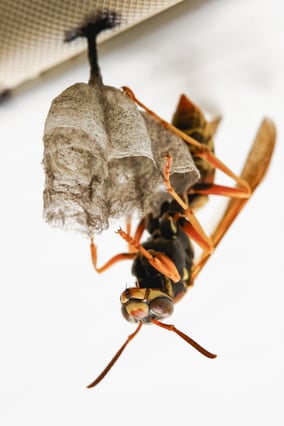 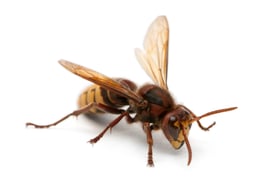 Behavioral differences between yellowjackets and other wasps

Perhaps the best way to distinguish a yellowjacket from another species of wasp is by its behavior. Most noticeable is the difference in a yellowjacket’s aggression. Wasps are generally wary of humans and tend to opt for avoidance rather than confrontation. Wasps can sting but will typically only do so when they feel threatened. Yellowjackets, however, are the schoolyard bullies of wasps. They are known to attack unprovoked, not only stinging humans, but potentially biting, as well. There is some debate about whether yellowjackets use their scissor-like jaws to harm humans; according to our entomology experts, it's certainly possible, but likely not very common as yellowjackets typically use their mandibles for feeding on prey.

As if that wasn’t bad enough, yellowjackets can–and will–sting multiple times in succession. While all wasps have this capability, it’s not common for them to do so, unless they feel incredibly threatened. Yellowjackets will sting multiple times just for the sake of doing so. The aggression of the yellowjacket rivals that of many other stinging insects, particularly towards humans, who they have been known to chase down to sting. The only redeeming quality of these stinging pests is that although they’re sting-happy, their stings tend to be less painful than other wasp varieties. Phew!

Another reason yellowjackets are often within close proximity of humans is due to their nesting habits. Most varieties of wasp opt for high and hidden nests, choosing places like tree branches, gutters, and roof eaves. Yellowjackets, on the other hand, build nests low to the ground (or even in the ground) where humans can accidentally stumble into. Some popular nesting spots for yellowjackets include basements, abandoned gopher holes, and even the lids of garbage cans. They’re also known to build hives in particularly tricky spots, such as between walls (yes–your home’s interior walls.) At EcoShield we strongly recommend that you do not self-treat yellow jackets in wall voids since this may displace them into other areas of the home.

I found a nest near my home – how do I know who the culprit is?

The location of a given nest can often be the best indicator as to what insect resides in it. As mentioned, a nest that is above the ground and hard to reach is likely a wasp variety such as the paper wasp. Nests in or near the ground are probably that of a yellowjacket. But there are other ways to determine what kind of nest you’re dealing with, and it’s as simple as looking at the hive itself.

In addition to being above ground, paper wasp nests are shaped like an inverted cone. Their size can vary greatly, but they’re typically between the size of a baseball and a football. Paper wasp hives are also typically grey-ish in color and look very paper-like, as the name suggests. If you encounter what you believe is a paper wasp nest, it is best to leave the hive alone and contact a pest control specialist immediately. Do not attempt to dislodge the nest yourself or spray any sort of chemicals directly at it. This will likely only anger the wasps and set an attack in motion.

Yellowjacket nests are often hard to see, due in large part to their underground or otherwise hidden locations. That said, yellowjacket nests can grow quite large, often reaching the size of a basketball by the end of summer. They’re also typically grey or brown in color and only have one entrance. These entrances often look like a small, roughly one-inch-wide hole in the ground. If you suspect there is a yellowjacket in or near your home, contact a pest control specialist immediately. Do not attempt to treat for yellowjackets yourself. Yellowjackets are notoriously aggressive and can inflict a great deal of pain on those who try to exterminate them.

Can I prevent wasp and yellowjacket nests?

Preventing wasps or yellowjackets from building nests can be tricky, especially for homeowners. The truth of the matter is, sometimes these sly stinging insects will find a way, despite taking all suggested precautions. Yellowjackets can be especially difficult to prevent due to their nesting habits. However, there are a few universal tips that may help dissuade wasps from building their home near your home:

There is a wasp or yellowjacket nest in or near my home! What should I do?

If you discover a hive in or around your property, we urge you to not attempt to treat it yourself. Whatever stinging variety may have built it, they will certainly come after you if you try to knock it down. Please remember that while not all wasps are naturally aggressive, every wasp variety will attack when their nest is disturbed. They will chase after you in numbers attempting to sting you multiple times. This could be a very dangerous (and painful!) situation to be in and is NOT recommended.

Instead, if you happen across a nest, call an experienced pest professional like EcoShield Pest Solutions immediately. Proper identification of the specific wasp you’re dealing with is key in removing the nest and preventing their return. Removing wasp or yellowjacket nests can be risky and is best left to professionals. For the safety of you and your family, call EcoShield Pest Solutions at the first sight of a nest in or around your home. EcoShield's trained professionals can remove nests as high as the second story of your home and come equipped with protective safety gear and extensive training in safe removal protocols. EcoShield also covers stinging insects such as wasps and yellow jackets as part of our Shield Home Protection plan, and a one-time wasp removal service is also available.

Call us today to safely remove a nest on or around your home or fill out the form on this page. 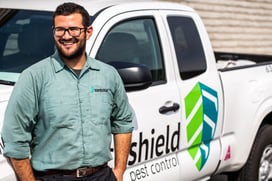