Home Blogs Should I Remove a Bald-Faced Hornet’s Nest Myself?

Should I Remove a Bald-Faced Hornet’s Nest Myself?

Known for their large size and notably painful stings, bald-faced hornets are warm-weather pests with a reputation that precedes them. While these hornets become active as soon as the weather starts to become mild, it’s not until mid-to-late summer that the population grows abundant. When this happens, it may be tempting to take matters into your own hands, especially if you’ve located the bald-faced hornet’s nest. In this blog, we’ll explain why DIY bald-faced hornet nest removal may not be the best solution to your concerns.

What are bald-faced hornets and where do they live?

Bald-faced hornets generally grow to a little over ½” in length in adulthood, while the queen grows much larger (nearing a full inch.) Like most other wasps, they have a long, pinched body and a triangular upper mid-abdomen. They also have six legs and two antennae. As mentioned, bald-faced hornets have a unique and striking coloring that sets them apart from other yellowjackets. Predominantly black in color, bald-faced hornets (as their name suggests) have mostly white faces along with white spotting throughout their abdomen and white striped “tails.” This unconventional pattern is where many of the bald-faced hornet's other pseudonyms come from – i.e. white-tailed hornet and blackjacket.

Are bald-faced hornets aggressive or dangerous?

Bald-faced hornet stings are extremely painful, and the venom can trigger pain receptors, causing inflammation and, for some, allergic reactions. If you are stung by a bald-faced hornet and are concerned about a reaction, please contact your doctor immediately.

It should also be noted that the bald-faced hornet’s aggression does not end at adults trying to remove unwanted nests – in fact, they will sting anyone (or anything) that they perceive as a threat. This includes unsuspecting children who accidentally wander near a nest or pets who find themselves in the wrong place. Cats or dogs who spend any amount of time outdoors during the summer are equally at risk of a bald-faced hornet’s sting.

If your pet has been stung by a bald-faced hornet or other stinging insects, we strongly encourage you to contact a trusted vet as soon as possible. 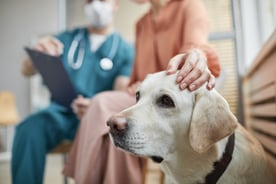 Where do bald-faced hornets build their nests?

Bald-faced hornets are social insects and are active during the day. You may be able to track down their nest by simply watching where they buzz around, but they also tend to nest in some predictable spots. Bald-faced hornets often build nests in high-reaching places where they feel most protected from predators and the elements. Generally at least three feet or more above the ground, some common nesting locations include tree hollows, dense bushes or shrubs, along fence crevices, in sheds, under outdoor lights, or even under the eaves of buildings (including homes!) Unfortunately, these hard-to-reach locations often make DIY nest removal exceptionally difficult for homeowners. This is especially true when you consider that a single nest can contain up to 400 worker hornets!

You can spot a bald-faced hornet’s nest by its large, oblong shape and paper-like construction. Bald-faced hornet’s nests are often shaped much like footballs and can grow as large as 3 feet across as the colony population expands. The nests are made of chewed-up bark or rotting wood – when masticated and mixed with the hornet’s saliva, a wood paste is made and used to form the nest. This gives the nests a brittle, almost paper mâché-like appearance on the outside. By design, it’s likely you won't be able to see the comb-like structure beneath the wood pulp exterior, which serves as protection for those within the nest.

Please be aware that even as summer comes to an end, it doesn’t mean bald-faced hornet concerns disappear. As the weather begins to cool, bald-faced hornet Queens will seek a warm, comfortable place to overwinter. Personal residences and homes are often targets for Queen hornets due to their consistent mild temperatures and safety from the elements. If you do not resolve a bald-faced hornet problem near your home during the summer, it’s possible the Queen may not venture far when winter approaches. Your home may be the nearest, most comfortable place to reside during the cold season.

Why shouldn't I remove a bald-faced hornet’s nest myself?

If the 400 territorial worker hornets residing within the nest aren’t enough to make you reconsider, you may wonder why you can’t just remove the nest yourself. The reality is, that you may be able to knock the nest down on your own, but the likelihood of doing so without causing you or your family harm is very slim. Bald-faced hornet removal is tricky to do yourself, and it’s unlikely you’ll be able to do so without being stung. Here’s why:

In general, DIY bald-faced hornet removal is a bad idea for those who would prefer not to be stung. At best, you get rid of the nest and kill a few hornets but suffer a bald-faced hornet attack by the survivors. At worst, you don’t even knock down the nest or kill any hornets and still get stung by aggressive bald-faced hornets. We don’t like those odds. Do you?

What do I do if I have a bald-faced hornet nest in or around my home?

The absolute best solution for dealing with bald-faced hornets is to contact an experienced pest professional to safely remove and eliminate the hornets. EcoShield offers as-needed bald-faced hornet removal services to those who are experiencing a one-time infestation, but we also offer stinging insect prevention and removal in our Home Shield Protection Plan. Our highly trained and experienced pest technicians have the necessary protective equipment and expertise to remove bald-faced hornet nests safely.

If you are experiencing a bald-faced hornet infestation in or around your home, don’t delay or DIY. Call EcoShield Pest Solutions today and let our trusted pest professionals ensure your home remains bald-faced hornet-free this summer. You can also submit the form on this page to be connected with the office in your area.