It’s cookout season which means freshly grilled burgers, late nights with friends, and… yellowjackets? Unfortunately, yellowjackets enjoy summer for many of the same reasons we do: warm weather, longer days, and delicious food. These unwelcome guests may come crashing your party in search of sugary sweets to feed on. Melted popsicles, drips from juicy watermelon, and even spilled lemonade are all on the yellowjacket’s menu of favorite treats. But why are yellowjackets so attracted to sweet and sugary foods? Continue reading to learn more about yellowjackets and their sweet tooth.

How can I identify a yellowjacket?

First and foremost, it’s important to be able to identify a yellowjacket and confirm what insect is crashing your cookout.

Yellowjackets are just one of over 30,000 wasp varieties that exist in the world. Wasps are a broad group of insects in the Hymenoptera order and Apocrita suborder. Apocrita is one of two suborders of Hymenoptera and includes insects such as ants, bees, and wasps. Yellowjackets are a small but aggressive variety of wasp that lives worldwide and make an appearance when warmer weather hits in spring and summer. Although many stinging insects can be seen buzzing around as temperatures creep up, yellowjackets are some of the more feared due to their aggressive nature and ability to sting repeatedly. Despite this, many cannot distinguish between a yellowjacket and another wasp variety due to the many striking similarities between wasp types.

Yellowjackets are noticeably smaller than other kinds of wasps, particularly the common paper wasp. For reference, adult paper wasps grow to be around 16-20mm long, while yellowjackets max out at 10-16mm in length. If you can get one to sit still for long enough, you’ll also notice yellowjackets have solid black antennae and short, yellow legs. In-flight, yellowjackets keep their legs tucked beneath them, while most other wasps will let their legs dangle. They also have striking, black-and-yellow banded abdomens, often with black dots within the yellow bands. While both a Western and an Eastern yellowjacket variety exist, their appearances remain fairly consistent, and they look quite nearly identical. 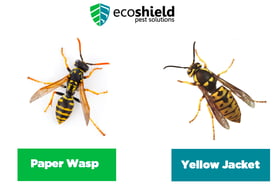 Do yellowjackets live near me?

Should you be concerned about yellowjackets crashing your next barbecue? The answer is: probably!

Yellowjackets can be found throughout most of the United States. From North Dakota to Texas and east to the Atlantic coast, it is said that yellowjackets tend to live wherever humans do. They are abundant in areas with vast woodlands, pastures, parks, and lawns. That said, yellowjackets are also known to frequent more urban areas, especially when searching for food.

Another reason yellowjackets are often within close proximity of humans is due to their nesting habits. Most varieties of wasp opt for high and hidden nests, choosing places like tree branches, gutters, and roof eaves. Yellowjackets, on the other hand, build nests low to the ground (or even in the ground) where humans can accidentally stumble into. Some popular nesting spots for yellowjackets include basements, abandoned gopher holes, and even the lids of garbage cans. They’re also known to build hives in particularly tricky spots, such as between walls (yes–your home’s interior walls.)

Yellowjacket nests are rarely visible to the naked eye due to their tendency to be built in hidden locations. Their nests can grow quite large over the course of the summer, especially when they go untreated. It can be very easy to overlook or miss a yellowjacket’s nest, allowing for them to continue to grow exponentially while out of sight. Nests can easily grow to be as large as a basketball, and the only indicator may be a small, one-inch hole in the ground and an influx of yellowjacket sightings. If you suspect there is a yellowjacket in or near your home, contact a pest control specialist immediately. Do not attempt to treat for yellowjackets yourself. Yellowjackets are notoriously aggressive and can inflict a great deal of pain on those who try to exterminate them.

While we can’t exactly ask yellowjackets what their preferred meal is, there are a few theories as to why it seems yellowjackets prefer sugary food. Some believe it is the scent of sugar-rich foods that draw yellowjackets in. It’s believed that sweet foods have a stronger and more aromatic odor, serving as a magnet to yellowjackets. This may also be why yellowjackets tend to hover near those wearing particularly sweet-smelling perfumes or lotions. Be wary of applying scented products if you intend to spend a lot of time outdoors: you may end up smelling like yellowjacket food!

It is also theorized that yellowjackets like sweets due to their energy-dense nature. It shouldn’t come as a surprise that sweet-tasting food often has high levels of sugar in it – for yellowjackets, sugar-rich food provides an energy boost. Sugar may also increase life spans for adult yellowjackets and improve reproductive functions.

Another more popular theory is that yellowjackets don’t necessarily prefer sugary foods but rather prefer ease and opportunity. Feeding on sugary drips, drops, and spills is a relatively effortless way to get sustenance. This is especially true when you consider the various other scraps and crumbs that often get left behind during a picnic or barbecue. A few unnoticed splashes of soda or roll-away grapes are like an all-you-can-eat buffet for a hungry yellowjacket! It appears yellowjackets may simply be opportunists with a penchant for sweets.

How can I get rid of yellowjackets?

If you’re experiencing frequent and consistent yellowjacket encounters (or have seen large quantities of yellowjackets), there is a strong possibility there is a nest nearby. If you’ve already tracked down their nest, please do not attempt to get rid of it yourself. Proper identification of the specific wasp you’re dealing with is key in removing the nest and preventing their return. Not only can treating it yourself be ineffective, but it very well may be dangerous, too. Please remember that while not all wasps are naturally aggressive, every wasp variety will attack when their nest is disturbed. They will chase after you in numbers and will attempt to sting you multiple times! This has the potential to be a dangerous and painful situation. Again, we do NOT recommend attempting to remove any stinging insect’s nest yourself.